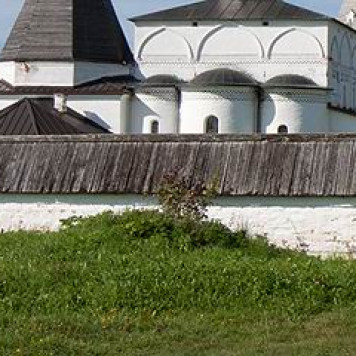 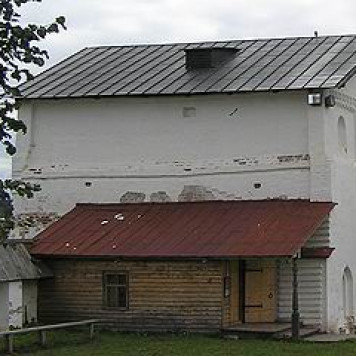 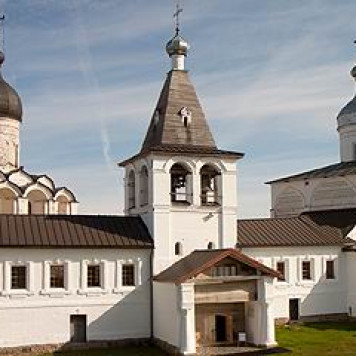 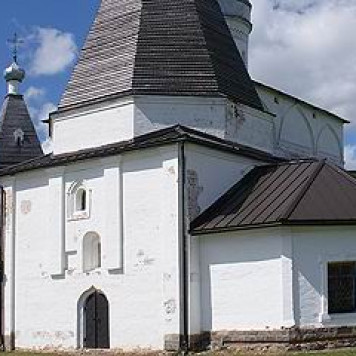 The Church of Venerable Martinian 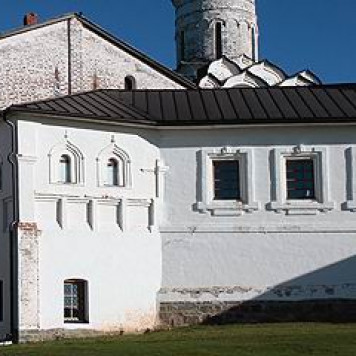 The Annunciation Church with the Refectory Chamber 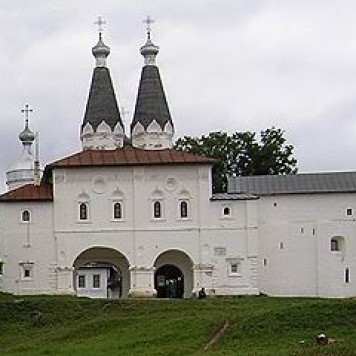 Holy Gate with Gate Churches of Epiphany and Venerable Therapont 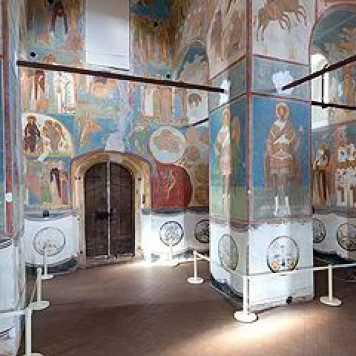 The Ferapontov Monastery of the Nativity of the Virgin was founded at the turn of 14th and 15th centuries, when the Grand Principality of Moscow was extending its political influence. The monastery was one of the most important cultural and religious educational centers in the Belozersk region for over 400 years.

The history of the Ferapontov Monastery at some key moments coincided with the major historical events of the formation of the Russian centralized state, and was closely connected with the most important historical events that took place in Moscow in 15th-17th centuries: the imprisonment and blinding of Grand Prince Vasily II the Blind, the establishment of the authority of the first “All-Russia Monarch” Ivan III, the birth and ruling of the first Russian tsar Ivan IV, the establishment of the Romanov dynasty, and the exile of Patriarch Nikon.

The year 1398 is traditionally considered as the foundation date of the Ferapontov Monastery. At that time Ferapont, adherent of Saint Kirill Belozersky, settled down on a hill between tow lakes - Borodaevskoe and Paskoye. Several years later, at the urgent request of the Prince of Beloozero Andrey Dmitrievich, Ferapont had to leave for Mozhaysk, near Moscow, where he founded his second cloister - the Luzhetsky Monastery.

The Ferapontov Monastery became widely known thanks to the activity of Saint Martinian, who was a disciple of St. Kirill Belozersky, the confessor of Vasily II and the Father Superior of the Trinity Monastery of St. Sergius in 1447-1455.

In the second half of the 15th and the early 16th centuries, the Ferapontov Monastery became a significant spiritual, cultural and ideological center of the Belozersk region, one of most famous Volga monasteries. Its elders exerted a great influence over the policy of Moscow.

Along with the Kirillo-Belozersky Monastery, it became a traditional place of worship and donations of the Russian feudal nobility (Andrey and Mikhail of Mozhaysk, Vasily III, Ivan IV, and others). At the turn of 15th and 16th centuries, the Monastery produced prominent hierarchs of the Russian Church - Archbishop of Rostov and Yaroslavl Joasaph (Obolensky), Bishop of Perm and Vologda Philotheus, Bishop of Suzdal Ferapont, who took an active part in the life of the country.

At the same time, the monastery was a place of exile for major members of the clergy (Metropolitan Spiridon-Savva and Patriarch Nikon) who attempted to assert the superiority of the church over the state. Book calligraphers Martinian, Spiridon, Philopheus, Pausius, Matthew, Efrosin, and icon painter Dionisy worked here.

The 16th century was the time of flourishing of the Ferapontov Monastery. The extant patents given by secular and spiritual authorities, above all Ivan IV, witness it. Grand Prince Vasily III and Elena Glinskaya and Tsar Ivan IV came to the monastery to pray there. The monastery donation book started in 1534 names among donors “the Staritskys, the Kubenskys, the Lykovs, the Belskys, the Shuiskys, the Vorotynskys…the Godunovs, the Sheremetevs”, members of high clergy from Siberia, Rostov, Vologda, Belozersk and Novgorod.

The monastery grew in importance after the uncovering of Saint Martinian’s relics and his further canonization, which increased donations and income.

The Ferapontov Monastery was the biggest landowner of the Beloozero region in the early 17th century: several settlements, about 60 villages, 100 uncultivated land plots, and over 300 peasants belonged to it.

The first stone church of the Belozersk region – the Nativity of the Virgin Cathedral was constructed by the masters from Rostov in 1490. It initiated the formation of the stone ensemble of the Ferapontov Monastery in 15th -17th centuries.

The monumental Church of Annunciation with a refectory, the Treasury Chamber and some auxiliary premises (a stone dryer, guest rooms, a kitchen) were built in the monastery in the 16th century. Having recovered from the Lithuanian devastation in the middle of the 17th century, they erected the churches above the Holy Gates, the Church of St. Martinian and the Bell-tower.

The Ferapontov Monastery was disbanded in 1798 by the Synod decree.

In the 19th century, during the parish period, a stone wall was built around the decreased area of the monastery.

At present, the Ferapontov Monastery houses the Museum of Dionisy’s Frescoes that has a status of the Historical, Architectural and Cultural Museum-Preserve. The museum was opened in the early 20th century and employed just one guard to protect the whole collection from the 1930s and to the 1960s. A modern type of museum has been evolving since 1975. It has become an important scientific research and educational center that promotes knowledge and information about the unique monuments of the Ferapontov Monastery via various museum means. In the late 2000, the ensemble of the Ferapontov Monastery with Dionisy’s frescoes was inscribed in the UNESCO World Heritage List.

The monastery buildings are probably the unique ones in the Russian North that have preserved all the peculiar features of their decoration and interiors.