The permanent exhibition of the Museum of Town and District History is open for visitors in the town house with enfilade layout. Dwelling rooms used to be located around a long corridor. This building has been restored and today it presents almost original interior of the house of the 19th century. You can visit a drawing-room, a study, a bedroom, a kitchen, a dining room, and a doctor’s room filled with articles that give you a chance to get to the atmosphere of that time. The displayed pieces of furniture and other items belonged to merchants, priests, peasants and residents of Kirillov and the Kirillov district.

Suite of soft furniture, a bentwood chair, a massive cupboard, a piano made at the Becker plant, a gramophone, and a card-table are displayed in the drawing room. The presented music box dated to 1897 was bought by the museum from a collector from Belozersk. Exhibited pictures were painted by the artists of Kirillov - D.V. Malkov (1867 – 1885) and B.I. Gorbunov (1922 – 1989).

Two corner Dutch stoves covered with white tiles have come down to us in the study. There is a self-portrait of D.V. Malkov (1867–1885) – the artist of Kirillov who graduated from the St. Petersburg Academy of Arts in 1833. An armchair characteristic of the 19th century is exhibited under the Malkov’s self-portrait. On the shelf of the cupboard, you can see a desk diary with a thermometer issued in 1913 on the occasion of the 300th anniversary of the Romanov dynasty and an azimuth circle – an instrument used for land surveying to get the site-plan. There is an ancient inkstand, a paper-weight, and an oil lamp “Matador” on the writing-table. Photographs of the local merchants – S.P. Andreev, A.V. Sveshnikov, N.A. Kozlov, Z.I. Markelov, and A.A. Kotov – hang on the wall of the study.

The interior of the bedroom consists of a traditional metal bed with a lace coverlet, a valance and festive pillow-cases. Three pictures painted by D.V. Malkov – portraits of a boy with the ball, the artist’s sister and mother – hand on the wall above the bed. An oil lamp, two boxes, and a wooden frame of the early 20th century with a photo can be seen on the table covered with a white knitted table-cloth. There is a table for women’s needlework with a toilet mirror in the corner of the room. The Singer sewing-machine is exhibited at the window. An alcohol iron with a special container attached at the back is displayed near the sewing machine. Women’s clothes and leather heeled boots typical for the early 20th century are presented near the wardrobe. There are candlesticks made of sea-shells at the beginning of the 20th century and women’s magazines on the bamboo what-not.

The Fyodorovskaya Icon of the Virgin (dating back to the 19th century) decorated with an embroidered towel is exhibited on the shelf in the corner. Pictures of the dwellers of this house of different generations were placed in a glass frame. A German metal stove-oven decorated with painting is of real interest in the kitchen. There is a kerosene lantern on the floor near it. It was usually hung from above when working in the utility rooms. Charcoal irons can be seen on the shelf. Such a device consisted of an iron box filled with smoldering coals and they had to swing the iron back and forth vigorously to keep the coals burning. A solid iron that was usually heated in a fire or on a stove is exhibited on a special metal base. A copper samovar presented on the cook-table used to hold a specific place among the household articles in the late 19th – first half of the 20th centuries. Woodenware, earthenware, delft ware, and china-ware mainly from the houses of local residents are displayed in the kitchen.

In the middle of the dining room, you can see a large dinner table surrounded with bentwood chairs that were very popular in the late 19th – early 20th centuries. Bentwood chairs were produced at the Thonet Furniture Factory in Vienna. The cupboard is decorated with carving depicting antique monsters. As for the cabinet, it was made by a local master in the early 20th century. A wooden stand for indoor plants has a round marble table top. China-ware, delft ware and glass-ware kept in the cupboards were mainly used in the houses of local inhabitants. A tureen, sauce-boats and a cream-jug were manufactured at the Kuznetsov Porcelain Factory. The copper samovar made in Tula and the china-ware presented on the table were used in everyday life of a large town family even in the early 20th century. Portraits of local residents painted in 1903 hang on the wall.

One of the rooms is named “Doctor’s Room” in commemoration of the doctor J.Y. Nodelman who lived in this house at the beginning of the 20th century. The doctor Joachim Yakovlevich Nodelman headed the town hospital in Kirillov which was situated in a two-storeyed stone mansion not far from his house. On the occasion of the 25th anniversary of his service in 1912, local authorities founded a scholarship in the non-classical secondary school and named a department of surgery in the town hospital after him. Celebration of this event evidenced public recognition of Joachim Nodelman. He was a doctor of the Kirillov Theological School since 1888. The doctor is depicted together with teachers and school-leavers in the picture taken in 1913 (he is the third on the right in the second row). A bookcase with glassed-in shelves holds an important place in the interior of the room. There are books on medicine, including the Real Encyclopedia of Practical Medicine (in many volumes) translated from German and published in St. Petersburg in 1912, medical instruments (a stethoscope, a syringe, a sterilizer) and apothecaries’ things of the early 20th century on the shelves. 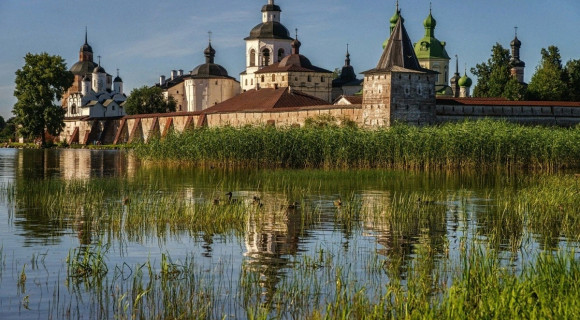